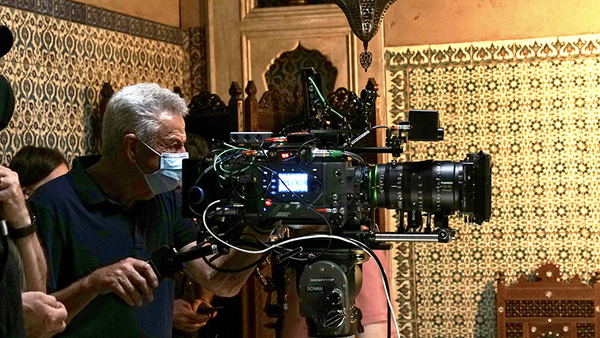 Australian cinematographer John Seale, AM ACS ASC, used a FUJINON Premista 19-45mm wide-angle zoom lens in the production of the new George Miller film ‘Three Thousand Years of Longing’, which wrapped earlier in 2021 in Sydney. At that time, the lens was one of only two in the world.

As John especially likes working with zoom lenses, he had heard about the Premista 19-45mm and thought it would work well for a specific type of shot that George Miller had storyboarded and carefully pre-vized for his film.

He contacted FUJIFILM and, despite the rarity of the lens, was able to organise the delivery of one of them to Sydney. The project was shot on ARRI Alexa Large Format cameras and John was pleased to have found a lens that can accommodate the entire ARRI sensor – not many lenses today are able to support large-format sensors.

The FUJINON Premista 19-45mm is a compact wide-angle zoom lens, one of the Premista set of large format zooms that includes the 28-100mm and 80-250mm lenses. “It's hard to find good full-frame lenses for the large format cameras,” said John. “But this lens achieves a remarkable level of edge-to-edge sharpness. It's a light lens as well, and has a lovely cinematic look with a softer edge."

The Premista 19-45mm captures high resolution images with an attractive, natural bokeh and fine tonality with high dynamic range. Those characteristics work well for ‘Three Thousand Years of Longing’, which often uses interior camera work choreographed to flow through rooms on a Technochrane, going from wide shots to extreme closeups.

Originally, the production had the lens on loan for three days, but after using it for a short time John and George decided to keep it for the entire production. "We've shot over 50 percent of this movie with the lens," said A-camera focus puller Ricky Schamburg. "The zoom cogs are precise, and the images match up with our signature primes. The lens has a clean look without appearing sterile."

In recent years, a larger choice of cinema cameras equipped with large-format sensors has become available, capable of recording expressive, high-quality footage. When shooting with prime lenses, camera operators need to change lenses regularly, depending on the scene conditions. Because the focal length of zoom lenses can be adjusted, allowing them to be used in a wider range of situations, demand for them has grown

Ricky remarked that the project’s visual effects teams at Fin Design & Effects and Method Studios were also happy to be working with the lens. "The FUJINON lens’ metadata communicates fluently with the ARRI Lens Data System, potentially saving many hours of post-production time," he said. All lens data is carried through the post pipeline and embedded in the original camera negative files for use in VFX.    www.FUJIFILM.com.au