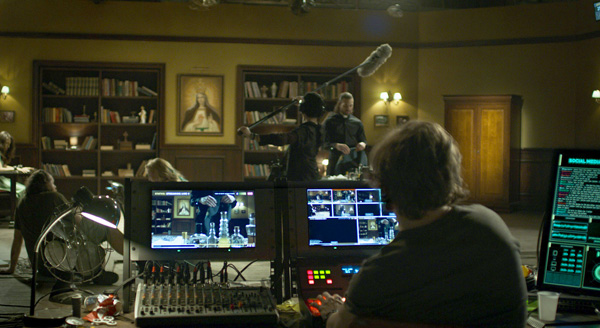 Independent director Damien LeVeck put his background in reality television to work for the concept of his most recent project, ‘The Cleansing Hour’. In the story, two entrepreneurs Drew and Max run a thriller webcast that streams live exorcisms. The action is, in fact, elaborately planned and staged performances and the two protagonists must pay their dues when one of their actresses is mysteriously possessed by a real demon that holds the crew hostage. The film premiered on streaming channel Shudder on 8 October.

Damien said, “I've observed that whenever people see a video on the Internet, especially if it's of lower quality, it automatically begins to look and feel more authentic to them than a polished production. Noticing that more and more outrageous material was appearing on Facebook, just to grab attention, I wondered what would happen if someone trying to fool an audience with fake exorcisms was suddenly forced to deal with a real one.”

Answering that question in a movie involved producing a webcast as part of the primary plot, and devising a complex video broadcast set-up to drive the story. As the characters struggle to handle the demonic elements that infect their webcast, on-camera screens would show the action in real time. Damien used Blackmagic Micro Studio Camera 4Ks to capture high resolution video of the drama, knowing that the cameras would cut well with the main unit photography. 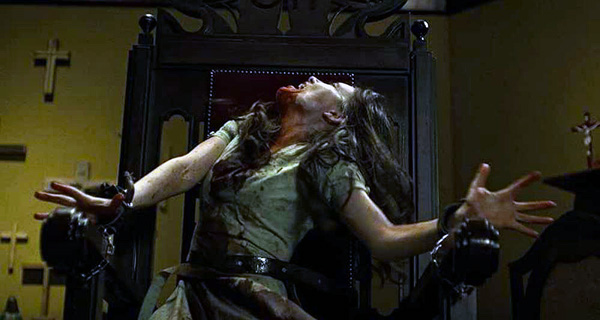 Damien said, “Shooting a movie about a crew shooting a project in a single room, while making it look interesting, was one challenge. Coverage was another – we had cameras pointing in every direction.”

Because active cameras were placed on set to feed the monitors, the main cameraman made efforts to stay out of their shot while still covering the action. Damien chose the Micro Studio Camera 4Ks because of their small size and interchangeable lenses. “The Micro Studio Camera 4Ks really held up fairly well in low light, which was important for this production. Keeping the set dark was a storytelling point, but the cameras still produced a very nice picture,” he said.

No Time To Waste

“Cameras were fed into an ATEM Television Studio Pro HD switcher, which fed the onset monitors. Because we could control the Micro cameras remotely from the ATEM, we could build a functioning studio set within a set, and for a relatively low cost.” Other gear, including two SmartView 4K monitors for multiview from the switcher, and two Teranex AV standards converters to convert additional analogue cameras for the switcher, created the active production set where the action takes place. Multiple Micro Converters were also used to modify signals in and out of monitors. 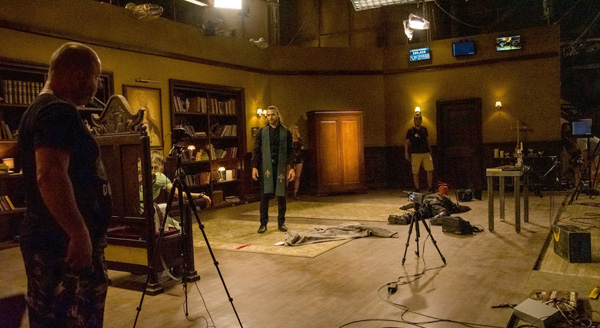 Once the onset video set-up was ready to go, Damien faced the job of creating the movie on a limited budget and short schedule. “We had to move very quickly, with no time to waste because every day called for a different combination of makeup effects, special effects, stunts and pyrotechnics – all of which take a lot of time to set up. Filming everything on time and in a creative way was a logistical challenge.”

As the story hinges on the main characters operating a real broadcast setup, Damien was pleased about having a functioning set, not just props. “Because all of the cameras and Blackmagic gear on set were running, our lead actor was able to interact directly with the ATEM to switch cameras and play out graphics.” A tangible, working set helped the actor tremendously to create authentic, natural performances.

After principal photography was completed, Damien and his team finished the film in DaVinci Resolve Studio. Resolve gave the team a chance to develop the look and feel of the finished movie while working fast and efficiently enough to manage the short time frame.

To make the best use of people and resources, the team used Resolve’s collaboration tools. Damien said, “First of all, the conform process alone was very smooth. We used a Resolve set-up in my office, and with a shared workflow I had one editor conforming one reel while another editor was conforming a different reel. They were able to work on the same project at the same time.”

With conform finished in-house, the DaVinci Resolve Studio project was taken to Banana Post in Burbank where colourist Chad Mumford created the final look over a three week period, also working in DaVinci Resolve Studio. Cinematographer Jean-Philippe Bernier brought in a variety of still frames from other projects with looks he wanted to emulate for various parts of the film.

Chad imported the stills and used them as layers over the grade. “Jean-Philippe was inspired by a particular scene in David Fincher's ‘SE7EN’ that had a very fast shadow roll off and slightly green blacks,” he said. “As a colourist, nothing is better than being able to pull those stills into the project and compare them directly to your grade.”

He applied a favourite technique to the dark, ominous photography. “I personally find myself emulating film when I grade. One of the plugins we incorporated into the grade was FilmConvert Pro. We did a luminance selection of the deep blacks, used FilmConvert to add grain and then inverted the selection. This is seen clearly in a scene in which a character is burned by the stage lights. We took time to experiment with grain, and then used Resolve's keying and HSL selection tools to create a subtle, distinctive film look.”

Telling this supernatural horror story and enhancing the creepiness of the images required over 400 visual effects shots. “Looking back, the creative challenge that stands out above all is grading the monster that reveals itself at the end of the film,” Chad remarked. “The veins of the creature were all modified on the Color page to appear almost like flowing lava. One of those shots probably had the most nodes I've ever used.”

In the end, the process was complex but warranted by the result. “All of our onset playback made the movie a technical challenge. Each screen, for example, had to display different content, specific to that moment in the movie,” said Damien. “On top of that were the VFX and makeup effects, leading to ongoing scheduling challenges. Nevertheless, it was the most fun I've had in my life, and I can't wait to do it again.”  www.blackmagicdesign.com