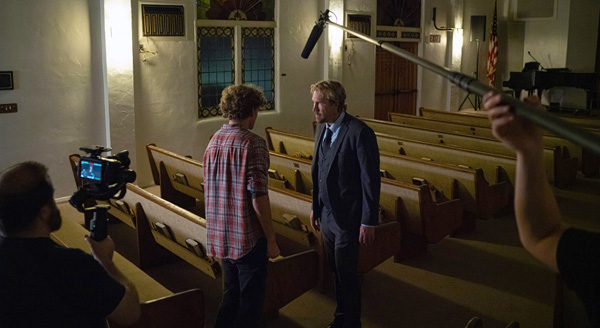 Two independent film directors talk about using the Blackmagic Pocket Cinema Camera 4K on their most recent projects to control looks, colour, costs and overall production values. On one of the films, a horror movie titled ‘ALIVE.’, the camera was used for close-up, tight angle shots, action shots, pickups and inserts – all of which give a low budget film a memorable style. In this case, the video quality made cutting these shots into the main unit footage a straightforward process, and enhanced the project’s visual flare.

For the other project, a dramatic thriller called 'Beckman', the Pocket 4K was chosen as the project’s main camera and used to capture in Blackmagic RAW. This codec helped the director, who also worked on the script, the grade and the cinematography, make the best of each set location by capturing as much data as possible, and then refining the frames in post. Both films were graded and finished in DaVinci Resolve.

The horror film ‘ALIVE.’ is a sinister story of a severely injured man and woman who awaken in an abandoned sanitarium with no memory of who they are or what has happened to them. The director Rob Grant worked with DP Charles Hamilton and colourist Brendon Rathbone. 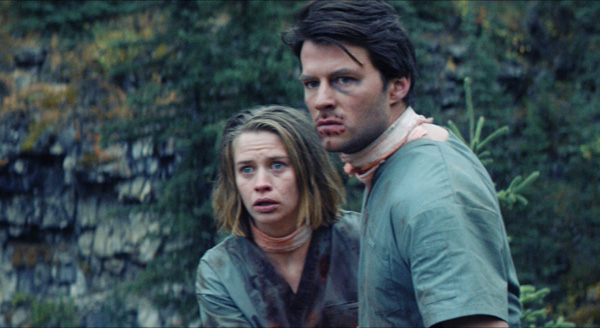 Owing to the frightening nature of the story, the Blackmagic Pocket Cinema Camera 4K was used for a large number of shots in the film including various close-up and tight angle shots, as well as action shots. Some of these involved a vicious-looking set of tools used at the sanitarium, resulting in dark, foreboding images of syringes and medicine bottles, and the hands using them. For these shots, Charles used the Pocket Cinema Camera 4K along with a hand-built crash camera with a 16mm Panasonic pancake lens, giving quite a wide angle.

One of the film’s writers and producers Jules Vincent said, “Due to the limited production budget, when we realised we had used up a lot of our available time capturing inserts and extreme close-ups, we didn't have the luxury of adding extra shoot days or rescheduling shots. The Pocket 4K saved us in so many ways when it came to making the most of our days and budget. In particular, Rob was able to recreate many of the pickups and inserts we needed that we couldn't accomplish on the day, without showing any difference in quality between the Blackmagic images and those from other cameras we'd rented for the shoot.”

The film, which was shot in Calgary, Canada, plunges the characters and viewers into a bloody, surreal and nightmarish scenario. Images move between the dark interiors of a rundown medical facility and the bright world that the characters face in their sadistic caretaker’s world outside the sanitarium. 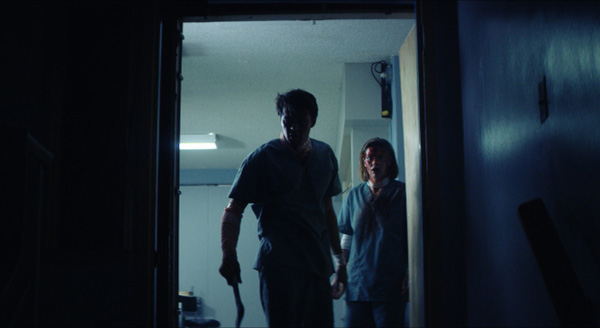 Brendon the colourist said, “Making this film was a really interesting exercise in finding how far you can push darkness without losing an audience. We compromised the visibility of some parts of this creepy, abandoned hospital so the audience has enough information, but not so much that we lost the tension or feeling of the scene.

“DaVinci Resolve is the only software I use for colour grading and it helped me get the look we were going for on ‘ALIVE.’ For any independent film, but especially for horror, you need a post suite that can handle most tasks. Resolve balances a huge feature set with stability very well, so I was able to colour the film quickly and efficiently. I also had a chance to elevate the look by performing certain essential tasks myself, like sky replacements and blood enhancements, in order to keep to budget.”

He remarked on one of the scenes in the film that DaVinci Resolve proved very useful for – a bath scene that was set in a bright white room, but also included a tub of bloody water. Brendon used Resolve’s lift, gamma, gain, log and offset colour wheel and contrast controls to make precise, subtle adjustments that both heightened the drama on screen, and created a dramatic difference between the dark and dirty facility, clean, sterile bathroom and bloody water.

“The resulting uncomfortable tension just feels like a great moment for the physical horror elements of the film, and is a unique look in the project without standing out in a bad way. Everywhere else is dimmer and cooler, which works well to create a grimy hospital vibe, but it was nice to break away to this single, somewhat sanitary spot with more pure whites,” he said.

Brendon also used DaVinci Resolve’s temporal and quantisation noise reduction tools to help pull out parts of the images from dim and darkly lit scenes. Temporal noise reduction uses the two types of data stored in video that produce the images – the image data itself, and data about how the frames are changing over time. From the combined data, an algorithm is derived that can not only determine which pixels have changed between frames, but also which pixels should change, depending on the action taking place in a shot. The software can then identify which pixels are noisy and calculate new values for them based on the surrounding pixels.

Quantisation noise maps the extreme variations in the dark and light parts of the image into a more limited range of variation, giving a result that is less accurate – and less interesting. Reducing this kind of noise is done either by oversampling to expand the range between dark and light, or by dithering – that is, adding more noise to improve the overall look.

“Resolve handles noise reduction very effectively, an ability that actually improved during post. Blackmagic released two updates between the time we started the film and final delivery, so we were able to quickly tap into the newer tools without a major re-conform. This really helped on a movie that has as many dark scenes as this one,” Brendon said.

“Besides the value, which in my opinion would be hard to match, in terms of tools it's a real Swiss Army knife. DaVinci Resolve will help with dailies, cutting, colour, audio, VFX and mastering. Whether you want to do everything within one package or not, the tools are still very useful just to go through footage or check files coming back.”

The action thriller ‘Beckman’ was handled differently, in that it was shot on the Blackmagic Pocket Cinema Camera 4K as the main camera, using the Blackmagic RAW codec.

‘Beckman’ is about a contract killer who casts off his violent ways and becomes the reverend of a small church in Los Angeles. For three years, he sets his past aside until a cult leader and a band of human traffickers kidnap his adopted daughter and his former life catches up with him again.

Writer and Director Gabriel Sabloff began working on ‘Beckman’ toward the end of 2018, when the lead actor and executive producer David A R White asked him to create a serialised revenge thriller. “The first conception of ‘Beckman’ was an episodic, seven-part series,” said Gabriel. “It was a simple revenge story that combined elements of all our favourite revenge movies.” The team always intended to join the episodes together into a feature film later on, but as they started production and watched the story develop, they decided to forego the episodic format and instead focus on ‘Beckman’ as a theatrical feature film.

Gabriel was also to serve as the cinematographer and, in choosing how to shoot the project, had to consider the budget ahead of all other factors, mainly because it limited their ability to use a large crew. But, having committed to a feature film, he still needed theatrical quality imagery. The Blackmagic Pocket Cinema Camera 4K seemed to be the best option.

“Low budget independent filmmaking means moving fast and working nimbly, especially if you are shooting an action picture with epic pretensions, and have to capture 20 or more set ups per day,” he said. “A big, bulky camera that requires a full crew to run it wasn't going to achieve our goals, and also attracts unwanted attention on location when you want to grab a quick establishing shot or b-roll material.”

In this case, the purchase price of the camera was as important as the specifications. “Size and ease of use were important, but we also wanted to own our gear because we were experimenting with a different production style,” said Gabriel. “We took advantage of the script, which kept its episodic nature, and spread out the production to shoot on weekends over the course of five months. That made buying the gear the right decision for us, and the Pocket 4K fit that plan – an affordable, very high quality cinema camera with a small profile.”

Gabriel also chose to record in the Blackmagic RAW codec to help when shooting in locations where an ideal lighting set-up wasn’t possible. “You don't often have access to the best locations on an independent film, but the Blackmagic RAW format can be manipulated to give you a better foundation than you appear to have on set,” he said. “On this project, that made quite a difference, as we spent a lot of time in fairly mundane locations that I had to make look more exciting through lighting and creative grading.”

Owing to the codec’s de-mosaic algorithm, part of the RAW processing is handled in-camera, where it can be accelerated, instead of shifting all processing into software. The partially de-mosaiced images are encoded together with the camera sensor characteristics and saved into the Blackmagic RAW file, allowing control over ISO, white balance, exposure, contrast, saturation and other image information.

Gabriel used these characteristics to correct inconsistencies in lighting or colour temperature mixing. Also, Blackmagic RAW images are encoded using a custom non-linear 12-bit colour space designed to yield as much of the colour data and dynamic range as possible. Instead of relying on LUTs, which may alter the pixel data, Blackmagic RAW uses metadata to define the creative intention and preserve it through post. Using the dedicated SDK, 3rd party software can access both the sensor profile metadata and Blackmagic Design colour science to maintain consistent colour rendering through the pipeline.

All post production was completed in DaVinci Resolve Studio. He graded the trailer himself and then, aiming for a gritty, contrasty, film stock look, worked with colourist Eric Yalkut Chase at Filmpool for the film. "We found that we could always get the best, most natural results with just the Blackmagic RAW settings, then move over to curves and adjustments for tweaking,” he said.

“Resolve was a central player in the ‘Beckman’ workflow, and we used its tools to make our low budget action movie look as though it had been captured with much higher production values. I'm an experienced cinematographer, but by no means a master. Since I was shooting without a grip, lighting or camera crew, I just shot a safe, general image in Blackmagic RAW and then developed the look and style of the image in post.”

In the end, Gabriel feels their choice of the Blackmagic Pocket Cinema Camera 4K was the right one – for its price, quality and reliability. “The camera did its job and didn’t cause any drama or interruptions on set. Interesting onset stories usually happen when things go hilariously wrong or need someone to heroically drive 100 miles to find replacement gear. On our film, the Pocket 4K was beautifully uneventful and that's the way I love my cameras to behave.”

‘Beckman’ was released in September 2020 by Universal Home Video on digital and DVD. ‘ALIVE.’ began its US theatrical debut in September and is now available on VOD services including Amazon, iTunes, Vudu, DirectTV and Fandango.   www.blackmagicdesign.com