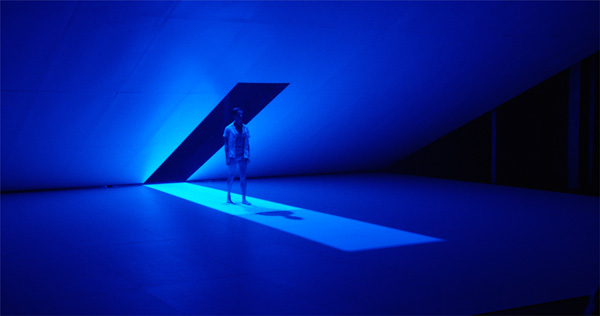 Most recently, Panasonic Varicams and DC-GH5 cameras were used to capture two plays, Michael Gow’s ‘Away’ and Katherine Thomson’s ‘Diving for Pearls’, with plans to show them in Australian cinemas and potentially internationally in 2018.

ANT Live is made up of Australian actor Grant Dodwell, actor, writer and producer Raj Sidhu and Peter Hiscock, a film and television producer. The team has negotiated agreements with theatre companies, writers, actors, unions, broadcasters, arts centres and cinemas around the country to film, produce and distribute digital content featuring live performances.

Grant said, “We were aware of the large size of this country and, owing to the dispersed nature of the population, how people miss out unless they are on the eastern seaboard. We decided that combining our collective skills with modern equipment would make it possible to achieve high production values. Updates to digital broadcast systems, for example, made the project much simpler and cheaper for us.” 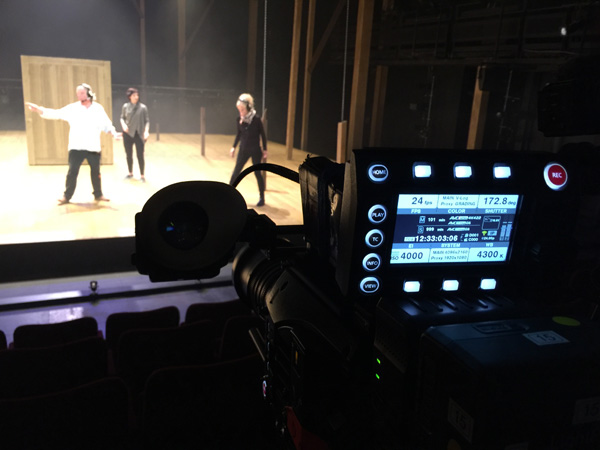 Equipment notwithstanding, for each production, the team must set up and shoot a feature-length production in a short timeframe to fit within the theatre company’s existing performance schedule, usually on one day. They also capture it with the audience in place, just like a regular production.

On the other hand, similar to shooting a feature film, the finished video must capture the original essence and energy of a live theatre performance. Re-takes are not an option - ANT Live makes no adjustment to the original performance while filming, and all microphones are hidden.

“But we are able to capture wide shots, close ups and establishing shots. Because of the resolution and image quality from the Panasonic cameras, which we hire from local Lemac and Videocraft supply companies, we can do a lot more work in the edit as well to make the results more engaging.“

Influencing the use of Varicams for both productions was the fact that the ANT Live team had been spending a lot of time on colour grading. Some of the large sensor cameras they had used previously had variable responses to the LED lights used in theatre. In addition, some models couldn’t shoot continuously for longer than 30 minutes. 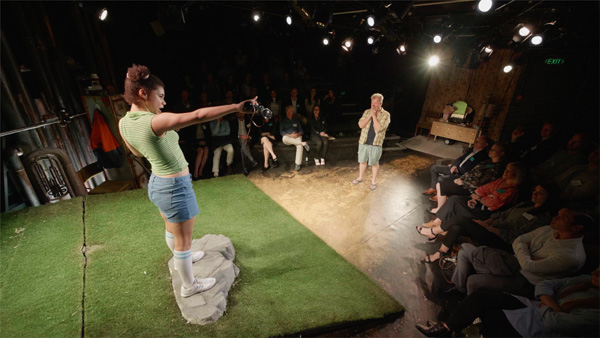 “We work with the lighting designers in the theatre, but we don’t ask for adjustments to their theatrical lighting,” Grant said. “The beauty of using the Varicam is that we don’t have to do any of that, and we have very little grading to do because all the cameras have been matched so well. The highlight for us is the skin tones that no other camera can get.”

The team was very pleased with the Varicam’s performance in low light situations, a critical aspect of delivering a high-quality finished production. He said, “We used the Varicam’s ISO capabilities (see below) to our advantage. In ‘Diving for Pearls’, one particular shot features the hero after he has doused himself in petrol. Only one spotlight is shining on him and being able to capture that gives the scene an operatic quality.

“Another advantage, from my point of view, was the depth of the black levels. In the case of the Griffin Theatre, we have cameras facing the audience with five other cameras positioned within the cameras' angles. But in the finished shots, those other cameras are lost in the black and not visible. I defy anyone to see the cameras. The black levels are so profoundly black that they are rendered invisible.”

Peter Hiscock commented on the contrasts between the two productions. “Because ‘Diving for Pearls’ at the Griffin Theatre in Sydney is performed on a very small stage, the Varicam has actually enhanced the production. When you see it on screen, you feel as if you have a front row seat,” he said.

“In comparison, at the Malthouse theatre in Melbourne, 'Away’ plays out on a very big, wide stage, which the Cabrio wide angle lens could highlight. I'd say that ‘Away’ is going to be our benchmark.”

Australian cinematographer Con Filippidis was the Director of Photography for ‘Away’, leading a  team of four camera operators shooting on two Varicam 35s and three Varicam LTs, with LUMIX GH5s used for locked off shots. Fujinon Cabrio lenses were used on all the Varicams. Con was also camera operator and Varicam consultant on ‘Diving for Pearls’, working with DP Paul Howard.

Con had shot theatre performances in the past, but usually with 2/3-inch cameras and never close to the scale or quality of ‘Away’. He also believes the primary benefit of shooting with the Varicams is their low light performance, which in this case allowed the operators to capture the original lighting design of the theatre production.

“With other cameras you can’t shoot live theatre that is lit purely for an audience, without planning for the cameras. In previous productions, the cameras used struggled with focus in low light,” said Con. 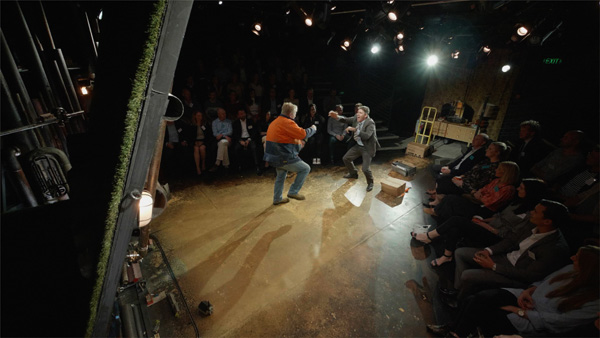 “Varicams are the only cameras with dual native ISO of 800 and 5000. They also have a great dynamic range down to 14.5 stops. We could expose really well for low lit scenes, with increased depth of field shooting at 4000 ISO from a 5000Base ISO. At this setting, we found our average exposure for a normally lit scene was T 5.6.”

Con's crew were consistently able to reproduce the intent of the lighting designer. “For example, in 'Diving for Pearls', there was a sunset scene that was orange and very warm, and a bright day that was very blue. The Varicam could handle all the colour ranges really well when set to 4300Kelvin, monitoring in a Rec 709 LUT in the viewfinder,” he said. “In low lit scenes, the colours are still true and vibrant, and the Varicam reproduces skin tones very faithfully. The pictures are impressive with dark, rich blacks and subtle colours.

“All the Varicams shot with Fujinon Cabrio zooms, which allowed us to match perfectly and are very clean and sharp,” Con said. We used zoom demands - handlebar style controllers that perform precision zooms - to follow the action ENG style smoothly and quickly. We wanted to have the dramatic impact of a close up at the right moment, using wide shots and creating pacing through editing, but the movie still has to make the cinema audience feel they’ve gone to see a live theatre play.” 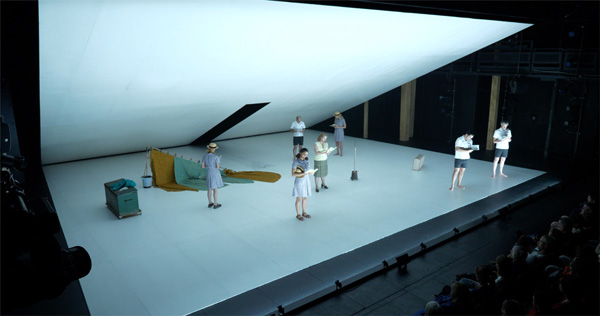 The GH5s were used for locked off shots on magic arms to capture further perspectives such as high angles to create the ambience of a live performance. On ‘Diving for Pearls’, Con used an app to view footage on his iPad and trigger them remotely. “The GH5s are small and unobtrusive so you can put them anywhere. It was handy as they were rigged up high and not easy to access without a ladder.”

Con said, “It’s important to shoot in 4K for cinema release, not just to future-proof your work but because it’s the best quality you can record in. Making a 2K DCP from a 4K acquisition is going to be better than originating in 2K for a 2K finish. Using 4K also allows you to crop into the image in post if so desired. 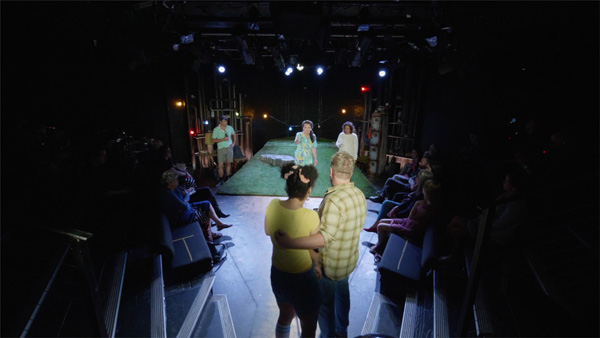 “I’ve seen the finished result from ‘Away’ and was impressed by the quality. The pictures were and lighting design were fantastic, and the cameras captured that lighting flawlessly. A lot of the time when you’re shooting a film, you have to bump up the levels for the cameras, otherwise they are underexposed. That wasn't the case with the Varicams.”

Grant feels convinced that using the Varicams is a differentiator for their product. Because the cinemagoer is seeing a theatre performance in a cinema, they have a chance to give the viewer a sense of the spatial positioning of the cast and the audience, and  see levels of acting ability that are seldom seen on film.  business.panasonic.com/products