The 2nd unit DP working on ‘Kong: Skull Island’ was Jacques Haitkin, assigned a range of action shots when the production shifted location to Hawaii. Over a long career, Jacques’ work as 2nd unit and action unit director of photography on blockbuster movies has contributed hugely to the level of spectacle they achieve. Well known examples in the last few years include ‘Teenage Mutant Ninja Turtles: Out of the Shadows’, ‘Captain America: Civil War’ and ‘The Winter Soldier’, ‘Furious 7’, ‘Captain Phillips’, ‘X-Men: First Class’, ‘The Expendables’ and lots of others.

Jacques talked to Digital Media World about cameras – choosing and using them on very demanding sets and locations. Over time he has learned how to set up almost any kind of shot, in any location, to capture the effect the production wants. He said, “Action filmmaking is always pushing the bar higher, for bigger shots, with more spectacle. I’m riding that trend, always having to push boundaries.” The idea is to be ready to try something new, while working out the equipment and set-up methodically and carefully.

“For this last category, the crash cam and disposable cam mount shots, we assess the stunt we’re capturing before we decide where we want to mount cameras for the greatest impact. Sometimes we want to put cameras in positions that represent a character’s point-of-view. In one scene, for example, Blackmagic Design Pocket Cinema Cameras were mounted inside a helicopter as it lost control and crashed down about 50m onto a tree.

“How dangerous that position is for the camera will determine which camera to use - a $10,000 crash camera or a $1,000 disposable camera. It depends on the project and what types of shots we are looking to get, but if we are putting the cameras in harm’s way, then they need to be affordable because they are most likely going to get wiped out. If we can guarantee the camera’s safety, then we might use a more expensive camera. Each circumstance is different, and we have to evaluate and make a risk assessment each time.

“Once the camera is determined, we line up the shot by eye, holding the camera in place where we want it by hand, while the grips measure the exact position of the lens and sensor. Then the grips build a custom rig to put the camera exactly where we lined it up, but solid as a rock, fortified in a speed-rail cage to protect the camera as much as possible without obscuring the image. For camera positions that are strictly for impact, we may use a crash or a disposable camera, but the process is the same for all of these types of impact shots. Assess, line-up, rig, shoot.”

An on-going consideration for Jacques’ 2nd unit crew, which numbered about 175 people, was working with the main unit cinematographer Larry Fong and his operators. All of their work, even intense action shots, need to cut well together with the rest of the film. “We held many consultations and scouted for locations with Larry and director Jordan Vogt. We also used animated pre-viz and story boards that Larry and Jordan had generated to keep us all working together, toward the same outcome.

This wasn’t only a question of making sure their cameras’ footage, and the main unit’s ARRIRAW footage, looked right together. It also meant thinking about shooting styles and camera angles. As far as possible they used the same cameras and lenses – the ARRI Alexa XT Plus and anamorphic primes – although for certain VFX shots, they shot with spherical lenses on the ARRIs. But for crash cams they were using Canon C-500s and Blackmagic Pocket Cinema Cameras, both capturing RAW to match the look of the ARRIs as much as possible.

Jacques said, “Stylistically, my approach is to absorb Larry’s sensibilities. On every shot, I think, ‘What would Larry do?’ My job is to be Larry, so at every turn I try to match his work. I watch all of main unit’s dailies, so I see what they’re doing every day. Also, if I’m adding to scenes that Larry has already shot, I have all of his footage and/or a rough cut of the scene to be able to adjust our work to match and cut in seamlessly with main unit.”

Similarly, his working relationship with the visual effects vendors - ILM, Hybride, Rodeo FX - was very close. “Besides detailed creative meetings in pre-production, we had the pre-viz and story boards that are overseen by VFX, and then we had a VFX supervisor on-set all the time to guide and coach us to make sure what we shot worked for them. This is the way we work on any film but was especially true for the plates for Kong.”

DPs specialising in action work have to think about cameras in very specific ways each time they finish one production and start another. “Every project, I re-assess the market place. I’m looking at cost vs quality and physical size and weight, ease of rigging - and bang for buck. For example, on a film I did right after ‘KONG’ we switched from the Blackmagic Pocket Cinema Cameras to Blackmagic Micro Cinema Cameras because they were smaller and had some convenience features that worked better for me as crash cameras.”

What has made the Pocket Cinema Cameras a good choice for this and other projects is its small size and weight, low cost and the fact that it shoots RAW. Regardless of the setup, Jacques needs the camera to produce cinematic images. Not only are they small, so he can rig them or put them in unusual, varied places, and affordable, but the 12-bit RAW and 13 stops of dynamic range produce the required cinematic look. They are also reliable and often keep running even when they’ve been hit and scraped off their mounts. “That’s just what you need in an action camera,” he said. 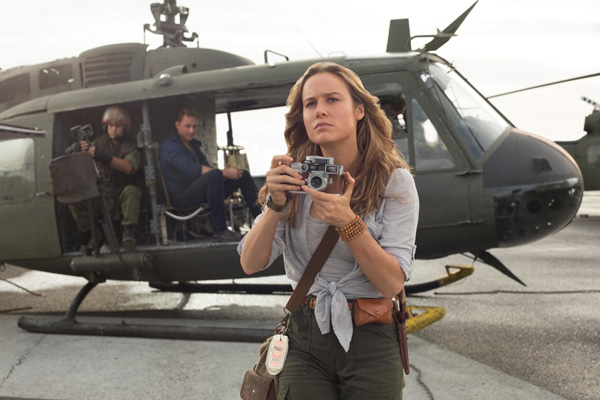 Jacques doesn’t actually own any cameras. For every film, he wants to be able to get the latest and best, and so doesn’t burden himself with trying to get a return on investment from gear he owns. Besides, new cameras are being developed pretty rapidly these days, continually gaining flexibility and new capabilities.

“This has made all the difference to my work," he said. "Because the creative bar is always being raised higher and higher every blockbuster season, I am always on the prowl for new tools that will help me find exciting, different ways of capturing action. So, a major part of my pre-production process is scouring the market for new gear that may be the key to inventing shots that have never been done before. It makes it fun and exciting. Like an explorer discovering an undiscovered place. We’re pioneers."  www.blackmagicdesign.com