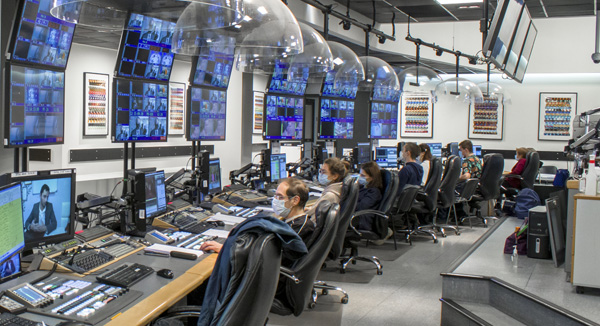 Channel One, Russia’s premier television broadcaster, has changed its operations from HD-SDI to full IP at its Ostankino Technical Centre in Moscow. The Centre now functions as a highly integrated ecosystem that encompasses a large number of workflows. It is used to broadcast 12 channels of news, sports and entertainment to more than 250 million viewers worldwide.

Over the last four years, the Ostankino Technical Centre has been transferring its own technical infrastructure to IP. Their efforts to adopt this more modern approach to video/audio stream routing and transmission, and the challenges they encountered, influenced Channel One’s decision to comprehensively upgrade its playout facilities.

Other factors included doubling the number of broadcast channels from six to 12, an ongoing interest in transitioning to ‘channel-in-a-box’ systems for on-air programs and a need to improve compatibility with the output format requirements of satellite and cable providers. Channel One also wanted to better integrate its playout system with its business applications, and use more of its complex graphics capabilities.

This kind of playout integrates components of the traditional broadcast chain, including various separate devices, into a piece of IT-based hardware. These systems can also integrate with automation and media asset management (MAM) systems. 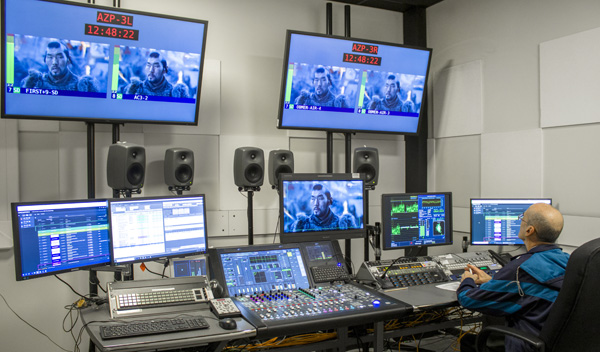 System integrator OKNO-TV and its service company Telerent TV implemented this project. Dmitry Sheykin, Project Engineer for OKNO-TV and technical director of Telerent, said a number of vendors were considered before investing in the core equipment for the new systems. Channel One chose Evertz, based on prior experiences with the company.

“Channel One and Evertz had collaborated previously on the installation of a special 4K Channel with Dolby Atmos that was built for their coverage of the 2018 FIFA World Cup,” he said.

Igor Yadykin, Deputy Chief of the Technical department at Channel One, said, “Making major changes to our playout facility is not something that we do often so we wanted to be sure it was a good investment. We are among the first broadcasters in Russia to embrace SMPTE ST2110 standards and have modernised our channel distribution and playout by installing a more software driven, adaptable workflow.”

The Evertz Mediator system installed at Ostankinocan can run on dedicated hardware or within cloud environments. It supports both linear automation and nonlinear delivery applications, prioritising workflows based on the required air-date. The Mediator-X platform uses clustered database and messaging services to achieve scalability. To handle growing amounts of metadata, the system uses a dual database architecture, which separates the transactional data from analytical and search data to tune the performance and support more features for each type.

Mediator-X handles the workflow, from ingest to delivery, through its media asset management capabilities. Structured metadata is indexed and searchable, and workflows are managed at the component level to allow video, audio, captions to move through the system independently. Since Mediator-X has knowledge of every instance of every component in the storage systems and can deliver components on demand, componentised global assets and virtual assets can also be supported.

Two Evertz Render-X proxy generator servers are in use. Mediator-X’s conform and transcode management tools interact directly with transcode engines like Render-X, describing packages in a way that allows the broadcaster to recreate its on-air style. 15 VUE CUBE workstations are in use to contextualise and set up interfaces to make workflows more efficient, and two Isilon storage clusters, main and backup, each with nine nodes.

Channel One has set up a multi-node virtualisation environment hosting Mediator core and computer nodes. Evertz designed Mediator-X to take advantage of certain aspects of virtualisation – for example, the ability to launch and retire particular services on demand. The Render-X transcoders can also be automatically launched and shut down to work with fluctuating non-linear distribution workloads. On the linear playout side, new channels can be configured and launched from inside the Mediator-X configuration tool.

Other components include monitoring tools such as VistaLINK PRO with graphics for the network management system and inSITE for real-time data analytics.

Two 5700MSC-IP Grand Master Clock and Video Master Clock systems with Automatic Changeover are in use. Igor said, “The new playout system was created for our Channel One time zone channels, of which there are 12 – each generating SD and HD signals at the same time. Previously, some of the time zones were doubling up but when we changed the system, we added five more hourly zones so that each zone had its own playout. We now have full redundancy, with separate racks and equipment for each channel, plus two spares.”

Moving to new products and systems required re-training for over 200 people whose roles covered ingest and archive as well as playout. Dmitry at OKNO-TV said, “Getting to grips with the new system was initially challenging, but once staff understood its capabilities, they were pleased about what it could achieve.

"The highlight is having all control of the processes of air correction and modification carried out through a modern HTML5 web client. In the automation system’s client application, users can now schedule and view a copy of the broadcast programs in low resolution with accuracy up to the frame.” www.evertz.com