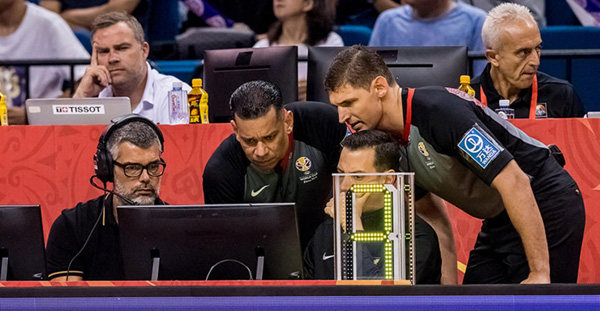 This year’s 2019 World Cup in China, held in September, comprised 92 matches held at eight venues, and reached an estimated total audience of 3 billion fans from close to 200 countries. At the venues, 56 officials from the 40 national federations represented at the event would be making decisions on the action at each of the matches during the tournament. 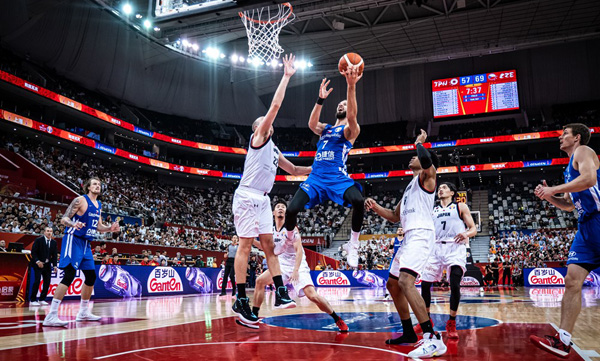 FIBA needed an instant replay system to support their decisions that would be be easy to deploy across all venues, and work with the speed and accuracy required at fast-moving, high-profile events. EVS’ Xeebra multi-camera review was chosen as the exclusive replay system for all venues, making sure all of the officiating teams had access to the same equipment, contributing to fair, accurate reviews of action on the court.

At each venue, EVS partner Mediapro deployed two PMX units, which are the processing modules used to run Xeebra, connected to three sets of two touchscreens with a very compact, mountable hardware Xclient on the back of one of the screens and a Beplay remote controller. One set of screens was placed on the courtside behind the scorers’ table for the instant replay reviews. The two other sets were used behind the scenes to tag refereeing actions and export them for debriefings.

The PMX software-defined processing modules are used to deploy products from EVS’ VIA platform. Built on a 2RU chassis, the PMX is a flexible hardware system that can be used for different purposes depending on the software it is used with - from Xeebra for video assistance to X-One, EVS’ unified live production system for single operators.

During the games, a replay operator and a Stand-By Referee played back and pre-selected camera angles from up to eight live feeds using a combination of the Beplay remote controller and the two touchscreens. The officials on the court would then review the action using the touchscreens so that they could examine every angle, precisely synchronised, and if necessary select an image to zoom into with touch-and-pinch gestures.

Because the PMX supports the ingest of high frame rate camera feeds to output in slow motion, the video quality allowed the officials to analyse the footage in close enough detail. The combination of pinch and zoom functionality and high frame rate support gives referees a chance to see the key action in greater detail. Also, Xeebra operators can sit with the screens anywhere in the venues – the client/server architecture with a regular GigE link supports the screens while the processing equipment stays in a control room.

The system’s ease of use meant that training sessions for the officials could be kept relatively brief. EVS ran a one-hour session with three different groups of officials before the tournament. They found it fairly simple to use the system to pick whichever angle they needed to help make the best, most informed decision at the time.

“Basketball is an extremely fast-paced game and it’s a challenge for officiating teams to clear up contentious decisions,” said Carl Jungebrand, Head of Refereeing at FIBA. “For such a high-profile tournament, it was vital for officials to have access to a tool that is easy to use, requires limited training and that allows users to swiftly manipulate multiple camera angles.”

The Xeebra system allows officials to view up to 12 camera angles that are kept entirely in sync, and to narrow their view from all feeds on a split screen down to one full-screen view and any number in between, giving them the ability to review one or more angles quickly, to make decision-making more efficient.

This was the first time Xeebra had been used at the men’s basketball World Cup, which is the Federation’s primary tournament. This event strengthens the partnership between FIBA and EVS that has continued since using the system at two of the Olympic Qualifying Tournaments 2016 in Italy and Serbia, as well as the Women's Basketball World Cup 2018 in Tenerife, Spain.  evs.com