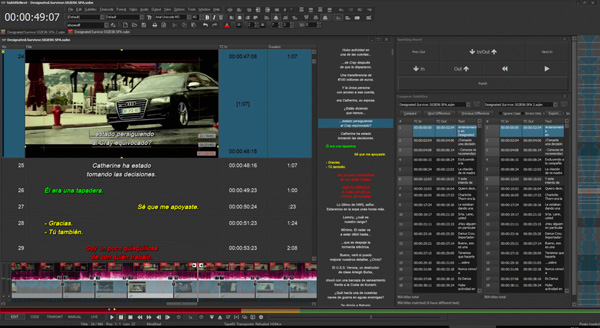 Alexander Stoyanov, managing partner and sales director of PBT EU, is also a subtitling professional. PBTEU develops and supplies systems and customisable system integration for content providers and broadcast, production and post-production companies. Alexander believes subtitling plays a critical role in broadcast workflows, but also that many broadcasters and OTT providers are overlooking the revenue potential of subtitles. “Broadcasters could use subtitles to reach a much wider audience and extend their services to make them more accessible to a larger customer-base,” he said.

Because people and devices continue to become more inter-connected, professionally and socially, subtitles or timed-text services have become a valuable commodity. Following recent government legislation enforcing the delivery of subtitling services to linear TV, OTT and online channels, broadcasters are under pressure to migrate to efficient, affordable timed-text systems. 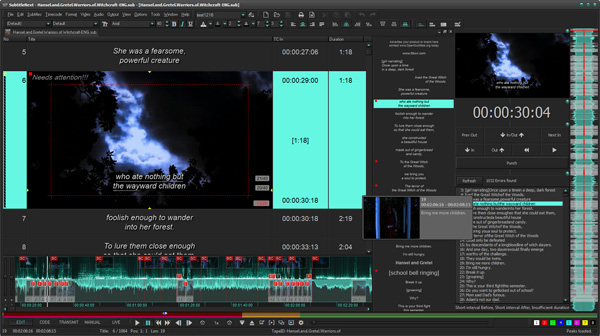 Recent research indicates that many people now view video without sound, whether on phones, laptops, iPads or other screens, at times outnumbering traditional television viewers. This trend calls for further subtitling especially among younger generations where it can serve to draw community groups together.

Subtitling has been a constant, evolving factor in accelerating and promoting the sharing of ideas internationally. Broadcasters occupy a responsible position through their ability to communicate en masse. Embracing timed-text systems can expand their influence, qualitatively and quantitatively. During the 1970s, subtitling equipment diversified and improved in terms of both preparation and the volume of output, and is now beginning to have a positive impact on the quality and uses of traditional television subtitling.

“Several different subtitling platforms exist now, and it’s important to take advantage of that and find the one that meets your own requirements within your budget,” Alexander said. “Subtitling is developing at a rapid rate. It adapted quickly to HD and other formats, and demands continue for better subtitle presentation, as well as the introduction of file-based production workflows and the inescapable convergence of web and online data.”

Subtitles are effectively timed-text metadata transcripts with tools that extract data. They support many scenarios by transmitting information, descriptions, translations and even emotion. They also leave the original material recognisable and accessible to viewers and result in a more authentic experience than dubbing or lip-synching would. 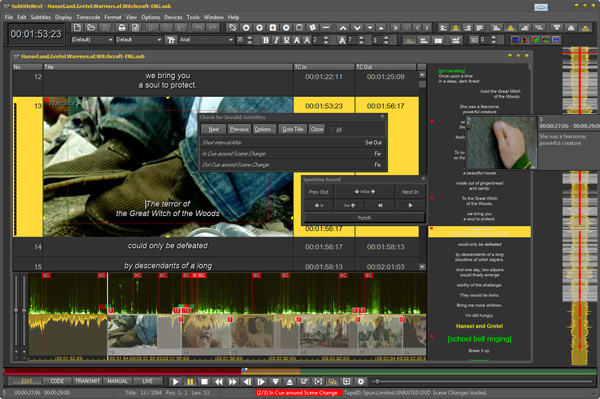 The role of subtitles is not confined to broadcast – they are now used often in speech recognition and literacy, aiding communication, language learning and live remote captioning. “In particular, it is vital that people with impairments can fully engage with television for social, cultural and family inclusion,” said Alexander. “About 40 percent of UK viewers watch TV on demand, over the internet for example, although less than 30 percent of people with hearing difficulties do so. More than two thirds of on-demand TV providers do not provide any access services – either subtitles or audio description.

“Broadcasters clearly need to keep up. Social media penetration is an influential driver for their industry – but remains an uncharted territory in terms of timed-text services. It opens many more possibilities and will largely define whole new segments in production and methods of consumption.

“Live events are another niche market where timed-text services are showing potential. In the future, live production will continue growing to a standalone industry due to the particularities and specific challenges it represents - an emerging market that we have already planned ahead for.” 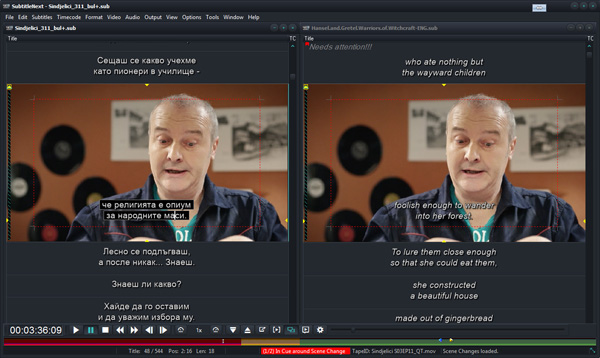 The quality of subtitles needs to improve overall, and broadcasters also need to improve the accessibility of subtitled catch-up and on-demand services. Most live systems are prone to delays and inaccuracies, therefore, pre-recorded programmes should have pre-recorded subtitles. Alexander believes once viewers are more educated about what timed-text servicing can do for them, quality will make even more of a difference.

“Because subtitles play a major role in localisation, respecting linguistic peculiarities is essential but not simple,” Alexander ommented. “Many European viewers still prefer subtitles in foreign programmes and films, but exactly where localisation and AI should meet as a way to streamline the process is an emerging topic. With Brexit on the horizon, attitudes of cultural exchange, including television viewing, may alter across Europe.”

Nevertheless, progress in reaching live audiences has been made in theatres, churches and universities, at concerts, conferences, festivals and exhibitions through loop systems and subtitling. Loop systems record video continuously to a server, but instead of just overwriting when the memory limit is reached, users have continuous access to the material during recording, and can edit, subtitle and save clips during ingest.

In 2018, London’s National Theatre introduced floating subtitles for audiences through the use of mixed-reality glasses. At the Vienna State Opera House, operas are mainly presented in their native languages and subtitling is used to make them more accessible - spectators hear the original performance, while following the story in their own language displayed on about 2,000 high-resolution screens around the theatre. Theatres and home cinema releases are on-going consumers of subtitling, and as 3D, VR and AR become more popular, these formats will need better subtitling as well. 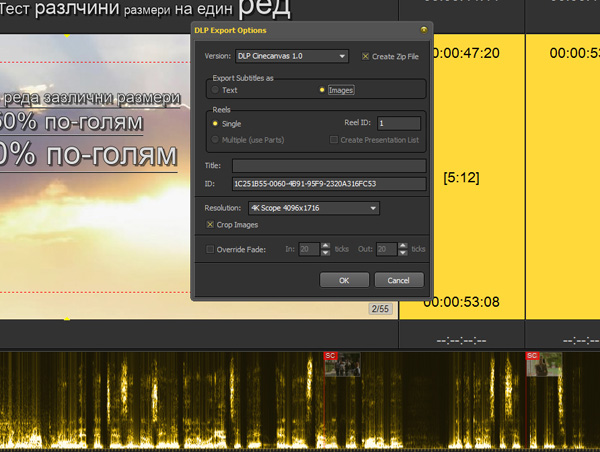 While faced with these developments, many content providers are still missing potential opportunities associated with subtitles. Alexander said, “Once broadcasters start to recognise certain advantages that different kinds of subtitling can bring their audiences, they will perceive it as an asset that adds value to their service. This is the first hurdle that needs to be overcome.

“After that, in my experience, the main challenge for broadcasters adopting new developments in subtitling is not technical or cultural, but the fact that many still work on the idea that subtitles are simply supplied as part of the content package, and remain unaware of the processes involved of the various technical formats and standards. Lengthy editing and QC procedures have to take place ahead of the actual delivery of accurate, customised timed-text services.

“On the post-production side, most editing software contains only fairly basic subtitling functions and furthermore, it is inefficient for an editor to take on the subtitling role as well as editing. Running a standalone subtitling platform, specialised in the full process, produces a better result and is a great time saver.” Like most aspects of broadcasting, deadlines, multiple versioning and last-minute corrections also govern timed-texts - complex assignments need straightforward, automated, fast handling.

A platform environment that supports diverse correctional tools is useful because all types of subtitle artists can learn it and use it to work more efficiently. It isn't true that traditional subtitling and broadcasting solutions go out of date and don’t develop. On the contrary, they are the core of media production and, despite the rise of AI, the human captioning factor is not disappearing. Automated systems are mainly used to reduce errors and ensure that TV programmes air smoothly. 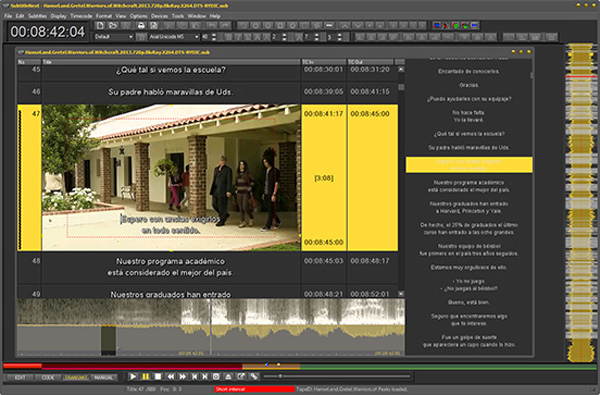 As an example, PBT EU distributes SubtitleNEXT timed-text software, a platform developed by Profuz Digital. Its approach to improving speed and efficiency is to address subtitling processes throughout the whole workflow. SubtitleNext comprises modules and applications needed to cover timed-text related scenarios from creation to distribution.

Its functions are controlled through Project Management Systems, linked to video subtitle materials organised in media asset management systems. You can also use SubtitleNEXT to work with live online content, either through video distribution platforms such as YouTube and Facebook, or via other real-time video applications.

SubtitleNEXT users can open, save, import and export many different subtitling formats including SUB, STL, SRT, CIP, PAC and DAS, and work with video in any format, at any frame rate. To meet the need for speed, scene tracking and on-the-fly format conversions have been added to shorten processing time. The package has an Audio Spectrum display that helps identify sound types such as speech, music and noise, and an internal engine that will automatically burn subtitles into video. It accepts a custom visual subtitle styling and exports subtitles for DVD, Blu-ray authoring and for cinema DCPs and 35mm. It also supports 708/608 CC (MCC/SCC) closed captioning.

A hybrid version of SubtitleNEXT called NEXT-TT was released at IBC in 2018. NEXT-TT operates with both web and desktop data simultaneously, online and locally, saving time by avoiding the need to switch between applications or download files to access information. 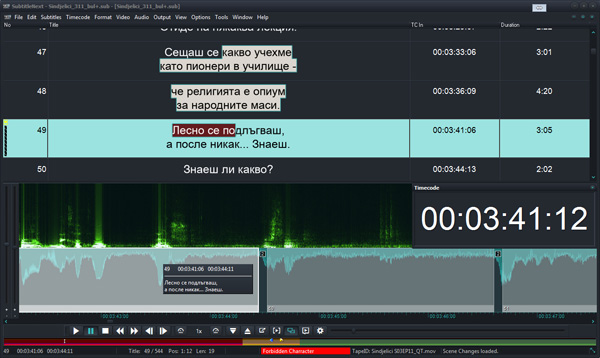 Broadcasters should consider subtitling software as a wider investment because, as I have described, it doesn’t have to be restricted to subtitling functions alone. Many of the technological innovations in subtitling have come through modules that now support universal subtitle format transcoding and real time live content,” Alexander said.

“Fortunately, expedient systems like timed-text services are usually defined by the people that use them. Proactive developers incorporate customer-driven development and understand how fundamental it is for software to integrate into collaborative systems within broadcast workflows. It should support all media from local files, streaming, custom-protected content for multipurpose text services, graphics for television, cinema, web, along with customisable UIs and more.”   www.pbteu.com