Narina Sokolova is a background painter, creating the worlds for animated series and shows since the 1990s working on projects ranging from ‘Rugrats’ to the Looney Tunes Cartoons currently streaming on HBO Max. She is also a Prime-Time Emmy Award and Annie Award winner. When she started her career, she worked with pencil and paper, watercolours and acrylic paint. Now the work is digital. Here, she talks about the role of background painting in animation, how it has changed and some of most memorable show she has worked on over the years.

Narina Sokolova was born and grew up in the 1970s and ‘80s in St Petersburg, Russia, a beautiful historic city that gave her an appreciation for scenic surroundings and architecture. At art school at the St Petersburg Stieglitz State Academy of Art and Design, she studied fine art, including classical painting and drawing, and especially liked creating landscapes, working with the light and shadow. She moved to the US in 1991 to continue her education and follow a career in art and, after moving to LA, she also developed a love for film and storytelling.

“The role of backgrounds in animation is to set a stage for performances,” she said. “They are intertwined with the characters’ stories, reflecting their nature and so a background artist needs to coordinate the design and style to work with the character design. They add visual beauty and introduce the emotional palette of the story to come, and in an instant, they can convey the time of day for the story and often the season.

“A film may actually start with the empty background environment – like an empty set before the actors arrive. Production design has essentially the same goal but uses different methods. As a background painter you are working in a 2D medium, creating a complete artwork or a picture to represent a world.”

When she starts on a new project, she will ideally have a chance to meet with writers, the production designer, producers and so on, quite early in pre-production to generate ideas about the visual language and style for the project. They collect reference for the show and talk about colours and creating different feelings for scenes. 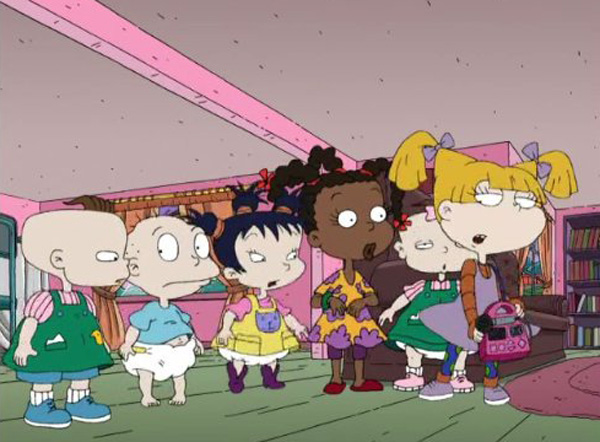 That’s the desirable scenario but sometimes she is called onto a project later on, after those discussions have taken place. In that case, her job is to study everything the teams have in place so far – any layouts, storyboards, character and costume designs – and paint a world supporting all of those elements.

Regardless of when she gets involved with a project, Narina generally starts with the layout artists’ line art – unrendered drawings of various scenes and location designs showing the key elements and camera angles. It’s also useful to refer to the storyboards and script to see and understand the main poses for the characters. From those layout drawings and storyboards, Narina designs, creates and paints the background as a section or angle of a location. 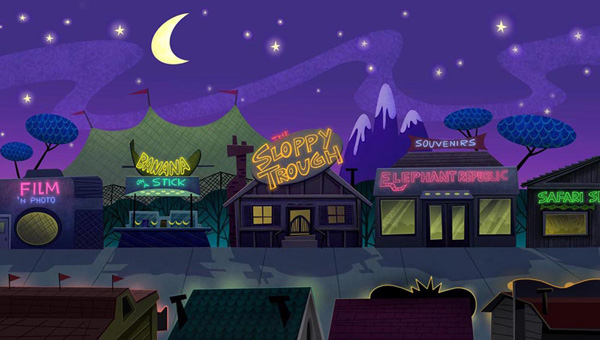 ‘My Gym Partner’s a Monkey’

She feels that she has her own unique style and colour sense, a way of interpreting a story that is more inspired by other artists and styles of art than influenced by them. “French Impressionism, Modern Art, early 20th century artists – those styles and artists have inspired me to try something new or explore in a new direction I hadn’t thought of yet, but I wouldn’t say they have influenced the look of the final work.”

Narina works on both 2D and 3D productions. “Each project is different but essentially, in a 2D project you see your artwork on screen in the background – the picture you painted. In a 3D project, you’ll typically send your art to the 3D department to interpret as a 3D scene. You work with them, back and forth, since they will be aiming to preserve your style and colours for the same overall look and feeling. You learn to accommodate the difficulties of moving from the 2D to the 3D format, and to understand that your original concept may not come through in exactly the same way in 3D,” she said. 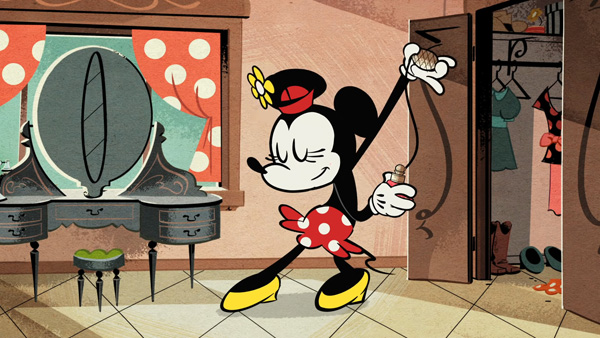 When she is working on an earlier, well-known property as she did for Looney Tunes Cartoons and the Mickey Mouse shorts (more about these below), a major task is translating the production into a digital workflow. “You need to find what gives the original production its timeless charm and preserve and enhance those qualities. For background paintings, a type of retro stylisation process is effective. If you look at the contemporary art and design styles of the era, it can reveal the looks that were inspiring the original artists and animators. Looking over the project’s poster art also shows you what those artists chose to highlight at that time.” Narina loves researching this kind of project.

As she was trained in traditional animation, she still likes to do pencil sketches at the beginning of projects. In the early days she would paint her backgrounds in acrylic and watercolour. Her scenes for 'The Incredible Hulk’ were created this way, for example. Later, as the industry began to change, she learned Flash and loved the control it gave her as an artist. 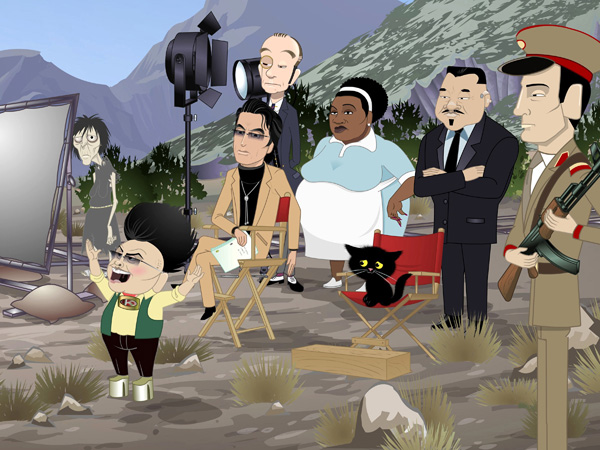 She created background work in Flash for several shows with a team at Comedy Central. Narina said, “One of the most unusual was ‘Kid Notorious’ made in 2003, a comedy series for adults. It starred film producer Robert Evans playing himself, re-invented as a cool James Bond type of character who finds himself in bizarre, slightly surreal situations. We really pushed the software’s capabilities as far as we could for the look – Flash was a quick, fun tool to use.”

The show was produced at a time when show creators were still uncertain of how well Flash suited broadcast programming. Because it was developed originally as a production tool, not necessarily for finished art, the results depended mainly on how the artists used it. Today, almost all of her drawing and painting work is done in Photoshop using a Cintiq tablet on iMac. While she doesn’t work in 3D herself or use 3D software, she needs to understand how those applications work because she works with 3D artists.

Because she has worked on so many varied projects, her favourites among them are hard to choose. Sometimes, what makes a show really memorable for her is simply having the chance to work with a great team. “Most recently, I was working on Looney Tunes Cartoons for HBO Max, which started airing in May 2020 as a web TV series,” said Narina. “It was developed by animator and producer Peter Browngardt under the creative leadership of Alex Kirwin with great art direction by Aaron Spurgeon. Peter hired animator/illustrator Jim Soper as character designer.

“In my role as background painter, I created the production backgrounds and colour scripts for the shorts. A colour script is a visual document that sets out the colour combinations relating to specific emotional highlights in the story. We tried to recreate the look of the original beloved Looney Tunes – and I think we came pretty close! It was a fun experience, pulling together huge volumes of original reference, and a fantastic crew.” When the first 10 shorts opened at Annecy Animation Film Festival in 2019, they received very positive reactions, described as true to the spirit of the original Looney Tunes shorts.

Another memorable project of a similar type was the Mickey Mouse TV Series, shorts created by Paul Rudish starting in 2013. “This show was one of the best 2D animated series I have worked on, with very high artistic standards. I feel fortunate to have had a role in it as a background painter from the very beginning of the first season. We really pushed the envelope creating beautiful retro looks with watercolour and vintage poster-style painting using Photoshop.”

‘My Gym Partner’s a Monkey’

Narina also won a Prime-Time Emmy Award for Outstanding Achievement for her work on the show ‘My Gym Partner’s a Monkey’ for Cartoon Network in 2007. This is an original series for kids that really shows Narina’s creative style in the backgrounds.

“A major project for me was the show that started my career, ‘Rugrats’. If you grew up in the late 1990s you will remember that one,” Narina said. “It was produced by studio Klasky Csupo, which was founded by Hungarian artist Gábor Csupo and his wife Arlene Klasky. The studio attracted talent from all over the world, turning it into a hip, multicultural place to be and work – we really had a lot of fun. I was a production layout designer there, at a time when we were still using pencils on paper. 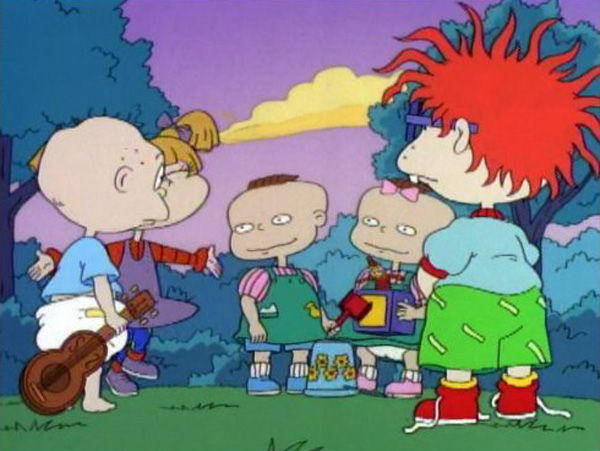 “Working in the old Hanna-Barbera building on the ‘Johnny Bravo’ series as a traditional painter was another milestone experience for me. The show ran for some years, from 1997 to 2004. Using acrylic paint on illustration board, working with painters who had been in the industry for decades painting traditionally, this job was my first real break into the industry.”

Narina finds that the hardest part of her job comes at the beginning of a project, before the team has really pulled together and aligned their vision. “Being part of a new team, often with accomplished people and artists who have done incredible work in the past, can be overwhelming and test your confidence at first. But once you all start working through the details together and see the story more clearly, the project comes to life.”   narinasokolova.com 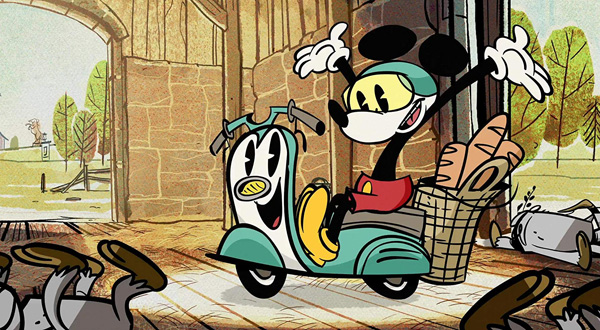 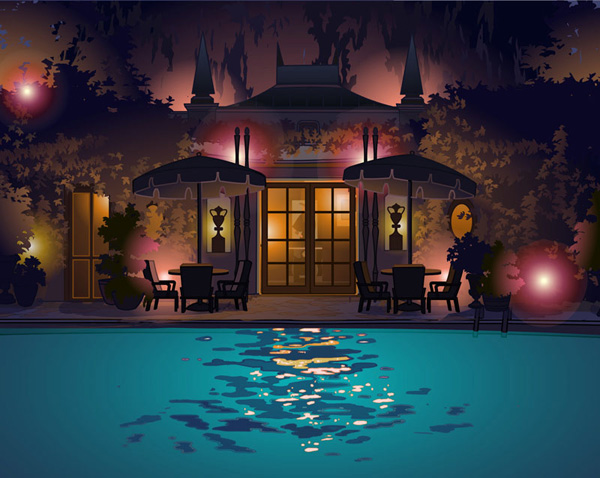