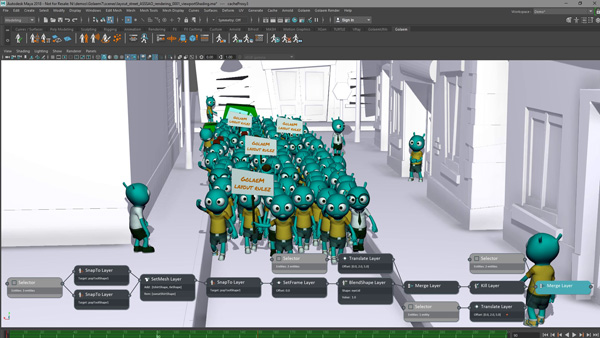 Golaem crowd simulation and character layout software is now released in version 7. It adds a new Character Layout Tool, including an animation node editor, that is compatible not only with Maya but with any animation software, and other capabilities. Golaem 7 also has a live link to the Unreal Engine.

Golaem is used to rapidly populate scenes while leaving as much expression and control as possible for animators working in Maya. Golaem’s Layout tool, originally developed for retakes to address animation frames that were inconsistent and interrupted the flow of movement, is now evolving as a new, independent Layout tool for procedural character layout. Artists can populate shots by placing their own purpose-made Population Vignettes into scenes and then editing them quickly to align with the shot direction. The overall effect is to save time and money for users.

A Population Vignette is similar to a simulation cache proxy, representing behaviour for groups of characters, which can be edited through directable layers that affect of motion and other attributes, such as automatic feet adaptation to the ground, look at, duplicate, controllable geometry and shading variations, animation retiming, IK autorig to retake animation and so on.

With individual control over these characteristics, artists can then adapt the scene to frequent changes in directorial intentions or in the environment. For example, reflecting the effect of new ground geometry on movement can be achieved in one click. 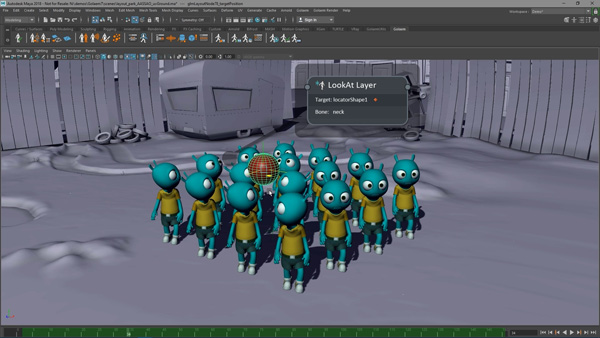 Look At is one of the layers used to control Population Vignettes for the Layout tool.

The edits you make to Population Vignettes are non destructive - that is, they can be kept if the simulation must be re-exported - and performed using a new node editor specifically designed to copy edits over to other characters, rearrange modifications, test different stacks of modifications and so on. The new Layout architecture also makes it possible to drive edits with locators, or to keyframe their values using standard tools in Maya.

Population Vignettes can be laid out manually or scattered through the scene using the Golaem Population Tool. Thousands of them can be animated in real time without slowing Maya down, or making the scene file take longer to open. 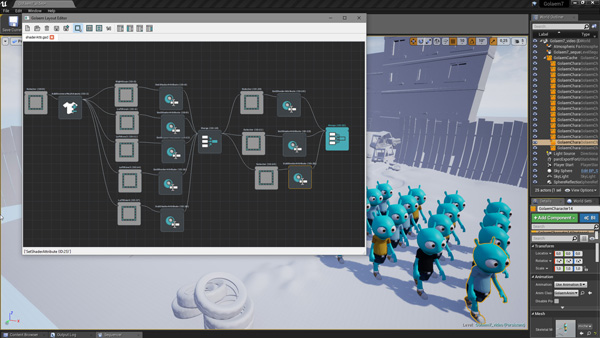 Round Trip Link with Unreal Engine

Golaem 7 includes a new plugin for the Unreal Engine allowing users to load Population Vignettes into Unreal and lay them out. Unreal scenes can be refreshed and will immediately show modifications made in Maya and, in turn, the Layout modifications can be edited directly in Unreal and reloaded into Maya.

By avoiding tasks such as baking Alembic caches and loading them in Unreal Engine, which takes time to keep elements in sync, this new workflow can speed up the work of a team. It has already been used to increase efficiency in production by Waterproof Studios and IGG Inc for in-game cinematics.

For users that want to customise their use of this new plugin, it is able to take advantage of Golaem C++/Python APIs that allow Golaem simulation caches and layout to be loaded quickly into any platform. For example, one Golaem customer has implemented an integration with Isotropix Clarisse in a few weeks. It also embeds the new Golaem Layout editor, which is independent from Maya, making it possible to use in any platform that supports Python.

The Unreal plugin source code is now available to customers so that they can compile their own Unreal Engine version from it, and contribute their developments. Golaem 7 has been beta tested for several weeks by Golaem’s major customers, in order to incorporate their feedback into the software.   golaem.com