Vivid Sydney, festival of light, music and ideas, officially opened at 6pm on 26 May 2017 with Dreamscape, a series of large-scale light installations that included the lighting of The Sydney Harbour Bridge and lighting of the sails on the Sydney Opera House.

Digital Media World was at the opening to video the sails of the Sydney Opera House as they were set in motion with 'Audio Creatures', a procession of fantastical plants and animals curated and designed by director Ash Bolland. Viewers watch as the creatures morph across the sails from one to the next before their eyes. The visual content was produced and animated by the Spinifex Group, also located in Sydney. The audio part of the title refers to a specially composed soundtrack by Brazilian electronic musician Amon Tobin.

Beyond the sails, the complete Dreamscape installation is designed to link the whole of Circular Quay precinct, from the Sydney Opera House to the Sydney Harbour Bridge, with the one interactive light projection display. One of the world’s largest interactive lighting displays, it uses buildings around the Quay and the bridge as surfaces for its textured, dynamic projections, including a one-kilometre line of light along the Cahill Expressway. It also sends 25 bright beams of light into the sky from the roof of the Overseas Passenger Terminal. On opening night, the beams had the small clouds overhead as nice projection surfaces.

The installation is a collaboration between lighting artist Iain Reed and his event production company 32 Hundred Lighting, designed to be accessible to participants, who can control the colour, texture and pattern of lighting along the precinct. The control hub for the installation is located in a perspex dome at Circular Quay and uses a purpose-built 3D interactive model of the city skyline - participants touch the model to change the colours and patterns across the buildings and the eastern face of the Sydney Harbour Bridge.

Another highlight closeby to Dreamscape was ‘Organic Vibrations’, an animated projection mapped onto the façade of the Museum of Contemporary Art. It is a collaboration between Danny Rose artists collective from Paris and an Australian artist Julia Gorman, resulting in a flow of constantly-changing images, shapes and colours over the building surface. 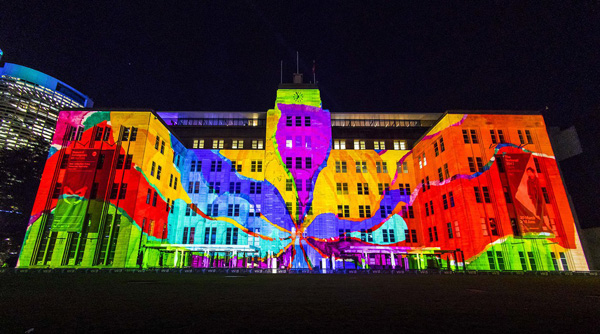 The artist created the original visual content with watercolour, oils and marker pens. These were synthesised with music and then animated into a 10-minute sequence by the 3D artists to produce a motion graphic of changing emotions and colours. At one point, the animations resolve as coloured strata, like the layers of a topographical map, making the façade look hollowed out in some places, inflated in others.

While the entire area of the city at its Harbour end was blossoming all evening into large and small light installations, one that especially caught our eyes and ears was called ‘Tidal’, a 3D installation that takes over a short alleyway. A translucent projection screen is suspended over the alley and the animated designs are sent down onto it from projectors in an upper level of an adjacent building. We spoke to its creator Peter Thompson, who runs an experience development studio called Hatch in Sydney, where the peoject was developed mainly using TouchDesigner software.

Peter explained that ‘Tidal’ charts Sydney’s evolution from before First Contact to the present day through a flow of sound and illuminated patterns based on real-time tidal data and sampled audio. The visualisations range from the modern activity of Circular Quay to the quieter natural environment of Bradley’s Head, combined with stories of the city’s location, history and architecture. As you walk under the gossamer screen the overall effect is of walking underneath the ebbing and flowing tide on a beach. The animated visual effect is matched by the sound design. The resulting project is not random but is the sonification and visualistion of real data.

Participants are immersed in stories of the Dreamtime, the arrival of the first settlers and the rise of industry, warehouses and bond stores that used to line the harbour. As the story continues it follows the construction of the Harbour Bridge and Opera House and eventually focuses on the on-going Quay Quarter development.

You can visit Vivid Sydney any night until 17 June.  www.vividsydney.com