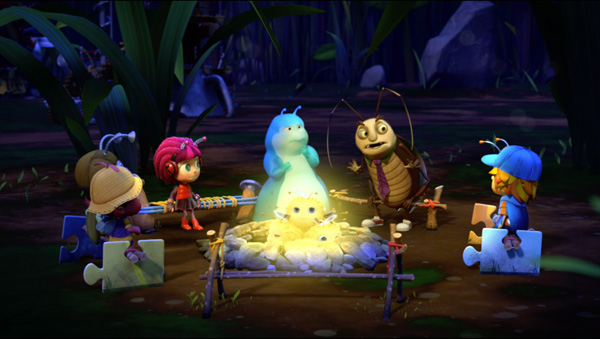 Atomic Cartoons in Vancouver has been making its name producing episodic animated series for broadcast networks around the world since 1999, and has won a number of Leo and Annie Awards during that time. Productions include the 2D project ‘Rocket Monkeys’ and an ‘Angry Birds’ short. Most recently the studio took on Netflix's ‘Beat Bugs’, a 3D production for kids about five insect friends navigating the wilderness of a suburban back garden. The show incorporates the special attraction of cover versions of well-known songs by The Beatles into its stories.

Atomic Cartoons is creating the 3D animation for ‘Beat Bugs’ in Maya and using NUKE to composite the render passes. The studio estimates that it has worked on over 10,000 shots for the series, comprising more than 100,000 individual frames - some taking just over two hours to render. Atomic's Head of Technology Rachit Singh said that, in terms of rendering demands, it has been the most demanding series they have worked on so far.

In order to optimise the use of resources during these intensive work periods, the studio is using PipelineFX Qube! render management software to divide jobs efficiently between the 400 nodes available for the show on their render farm. “I was introduced to Qube! by one of our software vendors,” said Rachit, “What interested me initially was how easy it was to set up - and in fact its option to define custom job types is an essential capability for us.”

Customisable job type functionality is very important in a facility like Atomic, which uses its own proprietary asset-management system, plus off-the-shelf production-tracking and playback tools like Shotgun and RV. The production studio uses Flash, Harmony and After Effects on its 2D animated productions, all of which require their own custom job types. 3D animated projects generally put still more demand on render resources. Setting up rendering for 3D shows can become complicated due to the various types of software that need to render, and the larger number of processes that use the render farm.

“The job types supplied with Qube! work well as supplied, but because they are constructed as open architecture scripts, they can also be custom-defined using Python to fit our production pipeline requirements,” Rachit said. Another useful aspect of Qube! for Atomic is its ability to centralize management of the render farm, including both the configuration of render nodes and the logging of render jobs.

Managing the farm from one central location saves them a lot of time when implementing new configurations and debugging problems. With the logs in one location, they can keep them on a central storage system to make them accessible from anywhere, and to prevent them from impacting on the performance of the supervisor machine – the computer that controls all of the render worker nodes.

Qube! generates reports of the activity occurring on the farm that contribute to Atomic Cartoon’s budgeting. Rachit said, “After each show, we look at the database to figure out what our average render times were, and how well we made use of the machines. This helps us predict the render power we’ll need for our next production.” In this case, the studio can use the activity information to plan the rendering budgets needed for other render-heavy projects similar to ‘Beat Bugs’.

Atomic Cartoons believes that Qube!'s customizability and centralization are factors that make the studio better able to deliver shows like ‘Beat Bugs’ within budget, and meet the tight schedules required for episodic broadcast animation. Rachit remarked that the support the studio receives from PipelineFX also plays a role in its production management.

He said, “We completed 13 episodes of 11 minutes each for ‘Beat Bugs’. The show had a pretty aggressive schedule - from layout through compositing we had roughly 18 weeks per episode. To finish on time we kept lines for multiple episodes running for each department. Consequently, we have been working with the Qube! support team on a regular basis, not just for bug fixes but for getting clarification on workflow best practices. The engineers are very knowledgeable.”

PipelineFX has just recently released the Qube! 6.9 update to their software. The Qube! metered licensing supervisor for PipelineFX’s cloud render services now comes standard with the application, and support for KATANA and Redshift has also been added.

Metered licensing adds capacity to render farms on demand, while monitoring and optimising the usage of paid-for licenses. Customers only pay for what they actively use. Metered licensing can be added to any existing Qube! Licenses and is available on local machines, rented machines or machines in the public cloud. The service monitors the total amount of Qube! licenses already paid for and only charges for each extra minute beyond the current paid license count - as soon as paid licenses become available, those are used to keep the overall spend per minute to a minimum.

Originally available on request, metered licensing is now built into Qube! as the default supervisor, so that studios can ‘burst’ beyond their perpetual or subscription licenses whenever required. Paid licenses will always be used first, so added costs are not charged until necessary.

Other changes in version 6.9 affect the ArtistView GUI, a visual front end designed to make managing renders easier for end users who need to manage their own render jobs. It is now more stable and has updated fonts, OpenImageIO support, a clearer preferences screen and colours better suited to colour blind users. This GUI will soon become the application’s default GUI.

Render teams can now assign and prioritize jobs by cluster, to help them prioritise departments within studios. Support has been added for the 2017 versions of Autodesk Maya, 3ds Max and VRED as dedicated job types. The Redshift renderer is supported, and users can now submit jobs directly from inside KATANA. In future updates, PipelineFX expects to continue improving the UI and optimizing their cloud services.  www.pipelinefx.com